Under the motto “The Experience of a Lifetime,” Jaguar has launched an integrative campaign via social media to open up a new target group for the Jaguar XE.

Together with star DJ Armin van Buuren, a pan-European Facebook campaign was launched. With more than 11 million Jaguar followers and the 8.5 million Facebook fans of the DJ Armin van Buuren, the campaign launch was extended to an enormous range. The social campaign we implemented uses an additional viral mechanism to reach as many potential Jaguar XE customers as possible in the given target group.

The entire campaign website was designed and implemented in a responsive design. The user thus experiences the same user experience on the different devices he uses for media consumption.

The clear objective of Jaguar, was the generation of KMIs and transformation into leads respectively buyers through offered test drives. 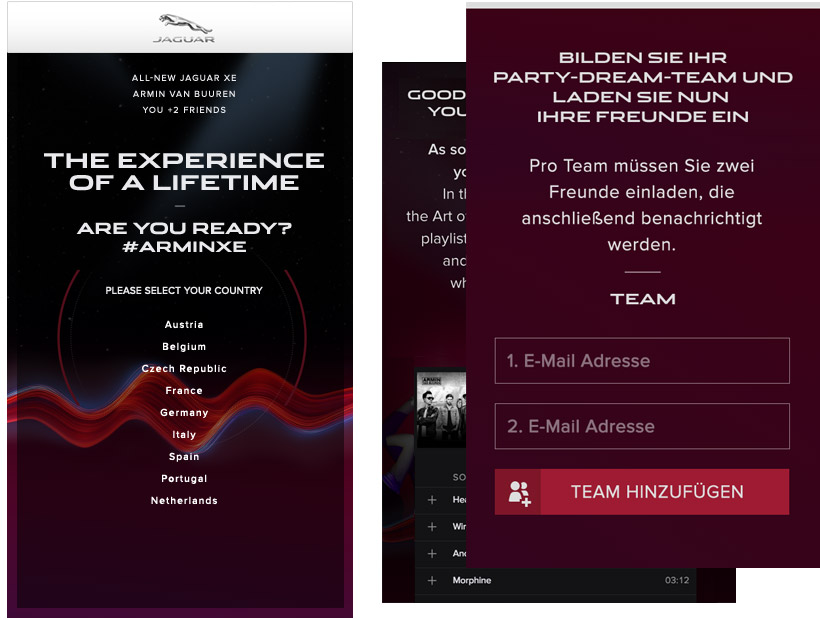 The conceptual development of the campaign was the result of joint workshops between Jaguar, Spark44 and vist. The project was realized in cooperation with the design agency himoto from Zurich.

Preteaser phase
In the first phase, the campaign was teased by means of a newsletter and social media postings. Curious users could register via Facebook login, with existing XE-Circle accounts or by e-mail.

Game phase
With the second phase, the actual action started. Participants were able to form teams of three each to attend the “The Experience of a Lifetime” in Ibiza. By completing a form, the participants have added friends to the team via an invitation mechanism. After accepting the invitation by the friends, the teams were completed and entered the pool of potential raffle participants. Through this viral effect, Jaguar was able to generate numerous leads, which were compared in parallel with existing CRM systems in the background.

Post phase
In the third phase, the winning teams from the different countries were accompanied with images and video footage of the “The Experience of a Lifetime” in Ibiza and posted on the Jaguar Facebook Page. Throughout the campaign, there was a cooperation with Spotify. On the music streaming platform, exclusive Armin van Buuren playlists were provided as an additional incentive to all participants in the social campaign.

We use cookies to analyze the traffic of our website and to make it better. Our partners may combine this information with other information that you have provided to them or that you have collected during your use of the services. By continuing to use the website, you agree to the use of cookies. Hide